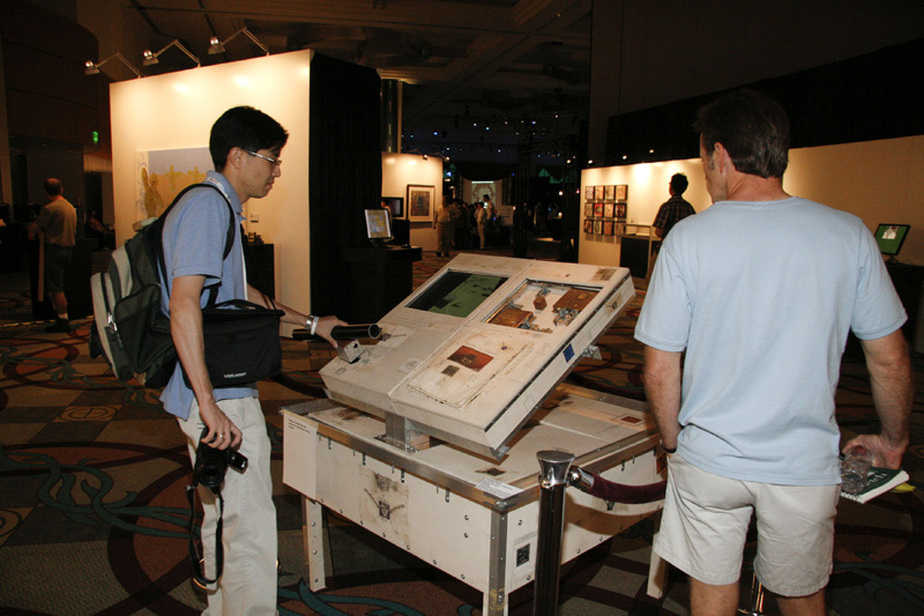 Palavrador is a poetic installation that uses artificial life algorithms and computer graphics to create poetry. It was originally conceived as a software application, by a diverse group of artists directed by Francisco Marinho during the UFMG 38º Winter Festival. The name means loosely word generator, the one who uses words. Poems from several  authors were integrated as living entities into the world, where they steer autonomously in flocks, turning around obstacles and keeping their cohesion. This work received the Digital Poetry Prize of Vinarós city, at Catalunha, in 2006.

Later it was decided  give a new dimension to the work, in form of a physical installation. It would expand the interactive possibilities by creating a book like interface. This new installation, dubbed Palavrador Openbook 2.0 was invited to the 2007 SIGGRAPH ART GALLERY. It consisted of two big pages: one containing the original installation, operated with a joystick, and the other with a sound interface and several cloth pages with embedded sensors.

Each page had light dependent resistors (LDRs) that could sense if the page was open or closed, and where the user hand was on the page. The input was used to activate the sound interface and parameters on the 3D world, shown in a embedded LCD. The sound interface was built together with Jalver Bethonico and used solenoids to hit sliced metal structures, producing sounds. I was responsible for the electronics and arduino programming.